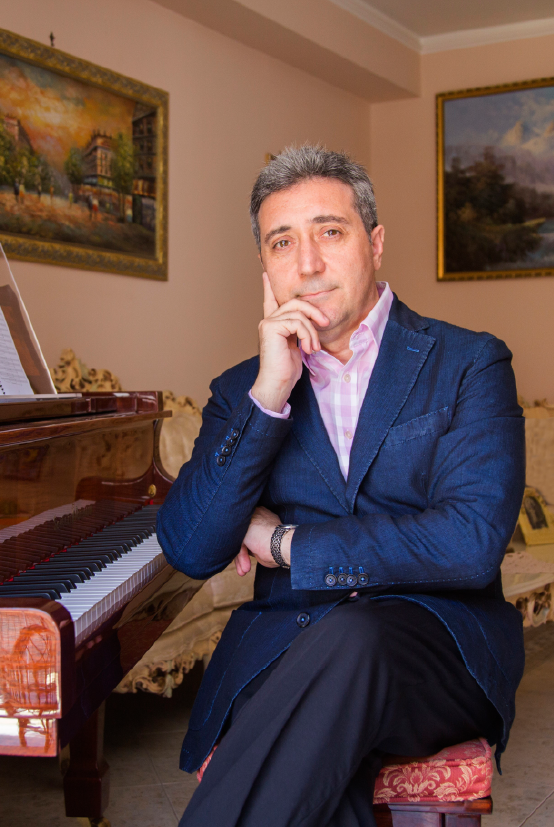 Born in Palermo, Italy, composer and conductor Salvatore Di Vittorio is heir to the Italian neo-classical orchestral tradition, “following in the footsteps of Ottorino Respighi” – Luigi Verdi, Philharmonic Academy of Bologna. He gained considerable attention with his completion of Respighi’s first Violin Concerto (in A) and other works by commission of great nieces Elsa and Gloria Pizzoli and archive curator/cataloger Potito Pedarra.

Di Vittorio is fascinated with the world of storytelling and best known for his lyrical orchestral poems, including program symphonies, which are often inspired by classical antiquity and show connections to the Italian Renaissance and Baroque. Under his baton, Chamber Orchestra of Philadelphia world premiered his Ode Corelliana in 2017, after the successful premiere of Venus and Adonis in 2016. “Di Vittorio’s Venus was an orchestral song, and often a beautiful one.” – Philadelphia Inquirer. “Venus…recalls Respighi, and is infused with Di Vittorio’s original imagination and ability to build musical architecture that ultimately fades, like Venus’s own loveliness. There is an appealing heft to this work, influenced by] Bach and Ravel.” – Broad Street Review. In 2015, San Diego Symphony world premiered his orchestral Fanfara del Mare “Su un Tema di Monteverdi”, commissioned for the centennial of Balboa Park at Copley Symphony Hall.

In 2012, Di Vittorio made his conducting debut with Orchestra Sinfonica Siciliana at Teatro Politeama Garibaldi. Giornale di Sicilia praised the evening “From Pines of Rome to the Temples of Sicily”, depicting Di Vittorio’s third symphony as “a commemorative memorial with a dimension of insularity, which during great peaks reveals suggestions of an international musical palette.” La Repubblica acknowledged Di Vittorio’s neo-classical works and in particular his third symphony, as “his first composition to capture Respighi’s impressionism, together with [influences of] Berlioz and Richard Strauss.” Mayor Leoluca Orlando awarded Di Vittorio the Medal of Palermo, recognizing “the great importance of Di Vittorio’s work as a promoter of Palermo around the world” – Il Moderatore.
Di Vittorio began his musical studies at an early age with his father Giuseppe, who introduced the operas of Verdi and Puccini. He studied composition with Giampaolo Bracali (later, conducting) and Ludmila Ulehla at Manhattan School of Music, and philosophy at Columbia University. He is a protégé of such esteemed conductors as Piero Bellugi (of Florence). His compositions are published by Panastudio/Casa Ricordi (Universal Music), recorded on Naxos Records, and listed in David Daniels’ Orchestral Music. With La Villa d’Este a Tivoli in 2016, Di Vittorio reached a significant milestone when he became the first composer to dedicate a work to The Morgan Library & Museum, and the first Italian composer during his lifetime to be invited to donate an autograph manuscript to the museum’s world-renowned music archive – followed in 2019, by donations of manuscripts of his completions of Respighi’s Violin Concerto in A and Tre Liriche.

Read Story Behind the Respighi Editions