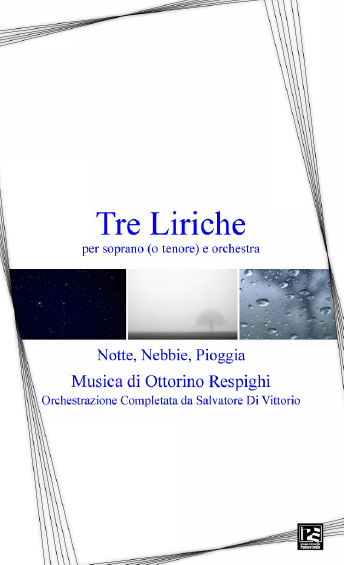 Tre Liriche
for soprano (or tenor) and orchestra

Program Notes/Il Programma
The Tre Liriche (Three Art Songs) include Notte (Night), Nebbie (Fog) and Pioggia (Rain), which Respighi had originally set as separate works for mezzo and piano between 1906 and 1912. He then decided to orchestrate the three songs as a song cycle in 1913 for mezzo Chiarino Fino Savio, for the world premiere on February 6, 1914 with Orchestra dell’Augusteo (now Santa Cecilia Orchestra) in Rome under conductor Bernardino Molinari. Luciano Pavarotti had championed two of the three songs in the 1970s. Potito Pedarra, the cataloguer of Respighi’s works, then rediscovered the existence of the lost (incomplete) opus with all three songs in the 1990s, well after the publication of his Respighi works list. Pedarra then numbered the rediscovered opus as Tre Liriche, P. 99a.

As part of the Respighi family commission, Maestro Di Vittorio completed Respighi’s orchestration of the extant orchestral manuscript, as provided by the Respighi family, for its first engraved critical edition in anticipation of its 100th anniversary in 2013. Tre Liriche is available for rental under publisher Casa Ricordi (Universal Music) in Italy in two versions: the original for mezzosoprano (or baritone) and orchestra, and for soprano (or tenor) and orchestra.