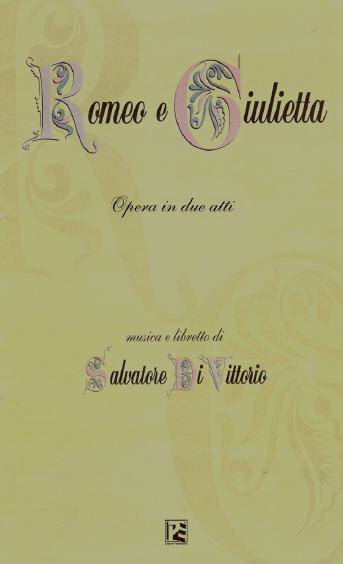 Romeo and Juliet, Opera in two acts
for six soloists, choir and orchestra

World Premiere
The opera was presented to the Teatro Massimo Opera Palermo
and Opera di Roma for review.
For other premieres relating to this work, visit: Performances

Prologue and Prelude of Act I.

Verona, 1591. A choir sings about the fiefdom between the Montecchi and Capulet families (“Families of Pari Nobilta”), and the fate of his children, Romeo and Juliet, a couple of lovers under a bad star.

At a Masked Ball at the Palazzo Capuleti, Romeo sees Juliet for the first time and falls in love with her, expressing herself with a waltz (“Teaches to the Stars”). Everyone sings about this universal love for women. Tebaldo recognizes Romeo, a Montecchi, but Capuleti considers him from confrontation, ordering that the party continue. As they all go outside, Romeo approaches Juliet and the two sing (“Sacred Sanctuary”) of their love, Romeo inviting himself to kiss her. The Nurse calls to Juliet from within. Romeo kisses Juliet and leaves sure of her relationship.

Romeo enters into Juliet’s garden and approaches under the balcony. Juliet and Romeo sing, first alone and then together, an aria-duet (“Qual’Luce Erompe?”) Confirming their love, and rejecting the hatred of families.

Act II.
Scene 1. Outside the Palazzo Capuleti.
(Enter Tebaldo and the Capulets, Mercutio and the Montagues, and then Romeo.)

Outside the Palazzo di Capuleti, Mercutio (and the Montecchi) meet with Tebaldo (and the Capulets). Tybalt offends Mercutio, while Romeo tries to excuse Tybalt’s anger in an airy alla-march. In a duel, Tybalt laughs at Mercutio – the Capulets laugh – until Mercutio is hit and dies. Romeo, desperate, sings a song (“Help”). Then Tybalt approaches. Romeo cannot bear the death of his close friend and hits Tybalt, and Tybalt dies. Romeo, sad, kneels and sings the aria (“O Dolce Giulietta”) in reflection of the bad fate.

Inside Juliet’s room, Juliet sings an aria (with flute, harp, and strings), comforting Romeo. Romeo and Juliet sing together the main reason for their love, in arioso. (Romeo exits.) Enter Capulets and Donna Capulets quarreling with Juliet, in arioso-elegiac, who does not want to marry Paris, a noble with a good relationship with Capulets. (Capulets and Donna Capulets exit, and then Frate Lorenzo enters.) After Juliet explains the whole dilemma to Friar Lorenzo, the good Friar, in air, gives us advice for a way to escape, via a square near the border of Verona. Juliet, with all these painful thoughts, almost faints falling to the ground. During this time, Donna Capuleti has heard the idea of ​​Brother Lawrence and reports all the information to Paris, who is already very angry and jealous of Juliet’s love for Romeo. Juliet,

Scene 3. A square near the Verona border.
(Romeo and Juliet, Chorus)

After the introduction of the choir (“Con Uguale Bellezza”), Romeo and Juliet sing for the last time, the main reason for their love. A Fanfare marks the race of Romeo and Juliet for the Verona border. Paris’s men (hidden among the buildings), shoot… hitting the two lovers.

The choir sings in reflection of this tragedy. Romeo first dies with his hand extended to Juliet. Then Juliet, already dying, approaches Romeo. Juliet extends her hand almost touching Romeo’s and dies. (The Nurse enters) A great music fills the theater, and the nurse kneels and recites a prayer for the two innocent souls.

Prologue and Prelude to Act 1.

Verona, 1591. A chorus, representing the citizens of Verona, sings of the feud between the Montague and Capulet households (“Famiglie di Pari Nobilta” or “Families of Equal Nobility”), and the unfortunate destiny of their children Romeo and Juliet, a pair of star-crossed lovers.

At a Masked Ball in the house of the Capulets, Romeo encounters Juliet and falls in love, revealing his emotions with a waltz (“Insegna alle Torce” or “She Teaches the Torches”). In honor of Juliet, the ensemble sings with Romeo about the universal love for all women. Tybalt recognizes Romeo, a Montague, but Capulet restrains him from confrontation, while declaring that the feast continues. As the Capulets and guests leave the ballroom, Romeo approaches Juliet and both lovers sing (“Sacro Santuario” or “Sacred Sanctuary”) about their mutual love, after which Romeo moves to kiss Juliet. When the Nurse calls Juliet from another room, Romeo kisses Juliet and leaves the ballroom, quite assured of her love. (Romeo exits.)

With a symphonic declamation, Romeo secretly enters Juliet’s garden and approaches her balcony. Juliet and Romeo sing, first alone and then together, an aria-duet (“Qual’Luce Erompe?” Or “What Light Shines?”) As confirmation of their eternal love and refutation of the hatred between their families. (As Romeo exits, Juliet reflects.)

Act II.
Scene 1. Outside the Palazzo Capuleti. (Outside the Capulet House.)
(Enters Tybalt and the Capulets, Mercutio and the Montagues, and then Romeo.)

Outside the Capulet house, Mercutio and the Montagues run into Tybalt and the Capulets. As Tybalt offends Mercutio, Romeo tries to excuse Tybalt’s rage through a march-like arioso (“Che, hai ci sei per dei musica?” Or “Do you take us for musicians”). In a duel, Tybalt mocks Mercutio and the Capulets laugh, after which Mercutio is stabbed and dies. Romeo, now desperate, sings a folk-song (“Help” or “Help Me”) and then approaches Tybalt. Romeo cannot accept nor tolerate the killing of his friend and stabs Tybalt, and Tybalt dies. Romeo, quite melancholy, kneels and sings a dramatic soliloquy (“O Dolce Giulietta” or “O Sweet Juliet”) in reflection of his misfortune and destiny.

Inside Juliet’s Chambers, Juliet sings an aria (“E ‘Giorno, E l’allodola Canta” or “It’s Dawn and the Nightingale Sings”) with flute, harp, and strings, in order to comfort Romeo. Together, Romeo and Juliet sing their principal love theme of hope (“Fortuna! Fortuna!” Or “Fortune! Fortune!”). (Romeo exits.) Capulet and Lady Capulet enter arguing in song with Juliet (“Giulietta, tu non capisci” or “Juliet, You don’t understand”), since Juliet refuses to marry Paris – a noble in good relations with Capulet. (The Capulets exit and Friar Lawrence enters.) After Juliet explains her dilemma to Friar Lawrence, the good Father gives her advice and an escape route through a square near the Verona border. With all this grief and frustration, Juliet almost faints as she falls to the floor. During this time, Lady Capulet has overheard Juliet’s conversation with Friar Lawrence and reports to Paris, who is quite angry and jealous of Juliet’s love for Romeo. While still on the ground, Juliet sings a reprise of the main aria from Act I with (“Romeo, Perche Sei tu Romeo?” Or “Romeo, Why Are you Romeo”), and then faints.

Scene 3. A square near the Verona border. (A Square near Verona’s border.)
(Enter Romeo and Juliet.)

After an introduction by the chorus (“Con Uguale Bellezza” or “With Equal Beauty”), as the citizens of Verona, Romeo and Juliet sing their principle love motif (“Fortuna! Fortuna!” Or “Fortune! Fortune!”) For the last time. A fanfare signals the lover’s race to the edge of Verona’s border. Hidden between nearby buildings, Paris’s men shoot the two star-crossed lovers.

As a finale, the chorus (representing the citizens of Verona) sings in reflection of this tragedy. Romeo dies first with his hand reaching towards Juliet. Then Juliet, almost dead, drags herself closer to Romeo. Juliet reaches almost touching Romeo’s hand and dies. (Enters the Nurse.) A great music fills the theater, while the crying nurse kneels over Romeo and Juliet, and recites a prayer for the death of these two innocent souls.