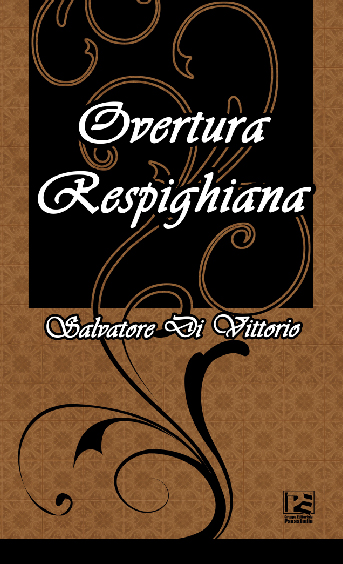 Recordings:
2011, Di Vittorio Sinfonia, Naxos
For other premieres of this work, visit: Performances

Program Notes/Il Programma
Overtura Respighiana was composed in 2008, one year before Di Vittorio’s completion of Ottorino Respighi’s rediscovered first Violin Concerto – the latter, a commission which he received from Respighi’s family descendants and leading archive curator in Italy.

The work served two purposes: first, an homage not only to Ottorino Respighi but his homage works on Gioacchino Rossini (namely La Boutique Fantasque and Rossiniana); second, a personal thank you to Respighi’s family for their permission to honor Respighi’s name and entrusting Di Vittorio with the editing and completion of several early Respighi manuscripts for publication (in their first printed editions), premieres and recordings with the orchestra that now bares his name Chamber Orchestra of New York “Ottorino Respighi”.

Overtura Respighiana was thereby dedicated to Respighi’s great nieces Elsa & Gloria Pizzoli on the occasion of Respighi’s birth anniversary on July 9th in 2008.

Di Vittorio’s initial plans for the overture began with a reworking of Respighi’s above transcriptions of Rossini’s piano music, Les Riens. During the compositional process, he realized a musical connection between the final movement Elegy of his own Sinfonia No. 2 and Respighi’s introduction of Pines of Rome. There was a strong resemblance between his variation on an Italian nursery rhyme at the ending of his Sinfonia and Respighi’s ‘children’s theme’ at the beginning of his Pines.

The Overture begins with a reflection on Pines of Rome, citing a reinvention of the principal elements of Rossiniana and the ending of Sinfonia No. 2. Di Vittorio’s goal for the introduction was to capture Respighi’s orchestral aesthetic at the beginning of Pines, but with entirely different and original motives and melodies. At first listening, the notes may seem quite similar, but they are not. Each orchestral line of the introduction is in fact original, not borrowed out of Pines. Only the choices and placements of instruments remain similar, not the melodies.

Through a series of fanfares, the music leads to a variation of the March from La Boutique Fantasque. Though this section remains the most similar in its reinvention, every single motive has been reworked to achieve varied harmonies – a playful reconstruction.

A brief sarabande interrupts, which introduces an entirely new Renaissance-styled melody, only inspired from the Valse Lente movement of La Boutique. Looking back, one may hear echoes of Hector Berlioz if not Richard Strauss colors and effects throughout the orchestration. This is the most deeply reflective moment of the Overture.

Through musical interruptions which serve as reminders of the work’s powerful introduction, we are led to a happy tarantella dance alla Rossini. Using similar ornamentation as Rossini overtures, this Overture ends with a full-fledged Rossini rocket or crescendo effect. The tarantella melody is entirely original, though somewhat inspired by the noted nursery rhyme motif in Di Vittorio’s Sinfonia No. 2. The same may be said of the related French horn motif at the beginning of the Overture, also original. The coda is a return of the middle section sarabande, in tutti.

Overtura Respighiana thereby fuses Gioacchino Rossini’s influence on Ottorino Respighi, with both of their influences on Di Vittorio’s own orchestral musical language.