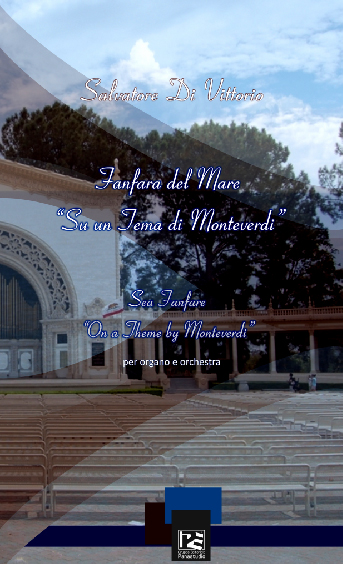 Recordings:
To Be Determined
For other premieres, visit: Performances

The Sea Fanfare is a short, happy fanfare/overture styled work that begins with a warm, sparkly sea effect introduction depicting the sunny waters of San Diego. Perhaps Di Vittorio’s connection with Ottorino Respighi is most apparent here. Though the organ is not treated as a solo instrument, it does take an immediate prominent role as it introduces the main theme – a motif inspired by Monteverdi’s madrigal “O Sia Tranquillo il Mare, O Pien d’Orgoglio” (Oh How Tranquil is the Sea, Full of Pride”), which Di Vittorio thought was quite fitting for San Diego and the Balboa centennial.

The sea effect quickly turns into a (ritornello type) fanfare showcasing the brass. This music is followed by a slow interlude/middle section with a poignant, memorable operatic perhaps film-like melody.

During this slower passage, the audience will feel as if they are getting closer to (or walking towards) the Balboa Park merry-go-round, a distinct music which takes over and then subsides back to complete the slower section. (Natives of San Diego, will recognize a re-orchestrated variation of the Balboa carousel music – as marked in the score and parts for musicians.)

The fanfare returns, merged with a festive spagnolo section (a Ballo Madrigalesco) honoring the explorer Balboa and the park’s Spanish influence etc. The sea effect returns for a quick coda bringing together the themes in a picturesque, triumphal closing.